skip to main | skip to sidebar

Q&A with illustrator of "Bobby Bramble Loses His Brain" 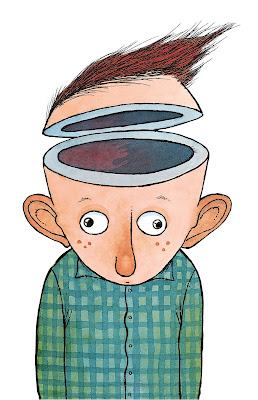 I couldn't be more proud of my picture book "Bobby Bramble Loses His Brain," in large part because of the absolutely awesome illustrations by David Clark. Here's an interview with David that gives you some interesting insights into his life and how he approached the task of illustrating a story about a kid whose brain has run off.

1.) Were you always the best artist in your class in elementary school?
I tried to be. I actually chaired the art committee in my elementary school, which I had no political talent for. I think I was impeached. I just wanted to draw.

2.) Did you go to art school? If so, where?
Yes, I went to the Pennsylvania Academy of the Fine Arts in Philadelphia, one of the oldest art schools in America. Ben Franklin was one of the founders and a heck of nice guy, too!

3.) Had you drawn many brains before doing this book? Did you have to study brains before you got started?
I’ve drawn a few brains in the past for cartoons in magazines. I did do some research on brains and a lot of sketching. This time I tried to stylize Bobby’s brain more than usual in an attempt to give it a little more personality.

4.) Do you have kids and do you ever draw with them?
Yes, I have three kids, and they seem to be in my studio all the time, drawing, painting, and generally making a mess!

5.) What’s your favorite thing to draw?
I love drawing people and animals…and, of course, MONSTERS!

6.) How many books have you illustrated? What’s the hardest thing about being a children’s book illustrator?
I’ve illustrated more than twelve books. Waiting to hear what the publisher thinks of the finished art is probably the hardest part—it’s very nerve-racking!

7. Was illustrating Bobby Bramble Loses His Brain fun? Was he a fun character to draw?
I can honestly say it was one of my favorite books to illustrate and read. Bobby was loads of fun to draw, with or without a brain (by that I mean Bobby’s brain, not mine!).

8. Weren’t you worried about drawing a brain with legs and a kid with an empty head?
For your information, the legs were actually a mutated part of the brain called the medulla oblongata. (Hey, it’s possible.) And as for the empty head, no one is perfect!

9.) What’s your favorite drawing in Bobby Bramble Loses His Brain?
I kind of like the Hamlet/Poor Yorik pose on pages 28-29, when Bobby holds up his brain and considers it. But that’s just today’s favorite; tomorrow’s might be different.

10. Have you written any children’s books?
No, but I have tons of ideas. It’s not as easy as you would think. I have immense respect for what Dave Keane can do.
Posted by Dave Keane at 5:19 PM No comments:

Dave Keane
CA, United States
Dave Keane is the author and illustrator of the "Joe Sherlock: Kid Detective" chapter books series published by HarperCollins. He is the author of three picture books: "Bobby Bramble Loses His Brain" (Clarion), "Sloppy Joe" (HarperCollins), and "Daddy Adventure Day" (Philomel). He is also the author and illustrator of "Monster School," a beginning reader series from HarperCollins. He lives in Northern California with his wife and their three children, a dog, a tortoise, and three guppies that always look hungry.